I recently popped my Steampunk cherry with Meljean Brook’s The Iron Duke, my March selection for the 2011 Speculative Fiction Reading Challenge. 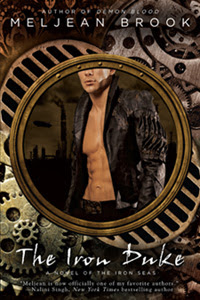 I had heard of steampunk before reading this book (who hasn’t?) but I didn’t really understand the appeal. That changed as I read The Iron Duke and got transported into a world where England has recently revolted against Horde control — nanotech “bugs” that augmented and controlled the English people for almost 200 years.

Our heroine Mina is a police inspector, and the product of a rutting frenzy triggered by the bugs between her English Lady mother and nameless Horde overlords. Because of her Horde features, Mina suffers everything from social slights to physical abuse as England struggles to pick up the pieces of their culture and move on from such a horrific time. When a dead body is dropped from an airship onto the estate of Rhys Trahaearn — pirate and war hero in England’s fight against the Horde — Mina’s investigation propels her into a conspiracy hoping to topple England once more. Add in zombies, privateers, and Horde-augmented giant squid, you are left with one rollicking, imaginative romance. Because yes, despite all the steampunk trappings, The Iron Duke is ultimately about the relationship between Mina and Rhys.

The book was named “Best Paranormal” in the 2011 All About Romance Reader’s Poll, which is where it first popped up on my radar. And I am so glad it did. This was the first book I’ve ever read by Brook, and I really enjoyed the deft writing, the characters, and the tremendous worldbuilding. Another book in the series will be released this fall, and I look forward to see how she takes the relationship between two minor characters from this book and weaves it into another story. I was impressed by the way she set up the second book in The Iron Duke, not to mention eager for more.

Be sure to check out the other March book reviews that are a part of the 2011 Speculative Fiction Reading Challenge.

One thought on “Review – The Iron Duke by Meljean Brook”