I’ll be joining authors Emily Mah, S.M. Stirling, and Sarena Ulibarri, who are all fantastic writers, humans, and coincidentally members of my local writing group here in New Mexico. 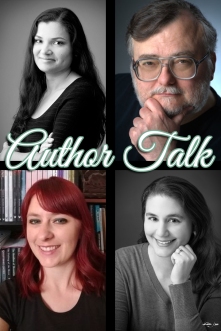 We will be talking shop, critting off the cuff, and generally having fun, so if you live nearby, please join us! For tickets and more information, please visit the Jean Cocteau website.

Hope to see you there, New Mexico!

Lots of things have been happening behind the scenes of late. Lots of writing (of course!) as well as editorial and administrative stuff to get my novel Implanted out into the world. But the busyness is helping to keep my nerves at bay as review copies are getting prepped and I start turning my attention to promotion.

In fact, I was recently interviewed by the wonderful people at the Breaking the Glass Slipper podcast, where I was able to talk about my influences in writing the book. I had a lot of fun with the questions, so be sure to check it out: 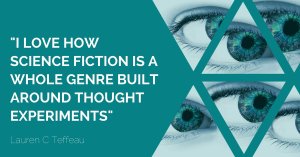 In other news, my story “Glitch,” appearing in Shohola Press’s Abandoned Places anthology, got a shoutout by SFF Reviews, and they also liked the anthology overall, so that’s always good to hear.

Finally, a few weeks ago, I was able to participate in the Jack Williamson Lectureship, which is held at Eastern New Mexico University every year. S. M. Stirling was the guest of honor, and luminaries like Connie Willis and Walter Jon Williams were in attendance as well. Fellow NM authors Emily Mah and Sarena Ulibarri, who is also editor in chief of World Weaver Press, were also guests, and it was just plain fun to hang out and talk shop for the weekend with other SFF enthusiasts in the community.

That’s it for me. Stay tuned!

The last few months have been a whirlwind in my personal life, making wording a bit more difficult than I’d like. But! Some fun things have been happening.

One of my favorite stories has been turned into a podcast by the team at StarShipSofa! “Jump Cut” originally appeared in Unlikely Story’s Journal of Unlikely Cryptography last year. The story is wonderfully narrated by Mike Boris and includes an interview with U of Washington professor Ryan Calo on robot law. Check it out!

It’s also cool to see some of the scifi elements I included in the story become closer to reality. Recently, Ars Technica profiled a company called Halo Neuroscience that uses electrical impulses to stimulate parts of athletes’ brains to boost performance. Very similar to the performance-enhancing implants central to my story. To see more how Halo’s technology works, check out the video below:

I was recently asked “What’s the best writing advice I’ve ever received?” for SF Signal’s Mindmeld feature, a roundtable of SF/F writers. Over the years, different nuggets of writerly wisdom have stayed with me, often as a function of where I am with my craft. Check out the column to see what’s guiding me these days.

Reprint of “Forge and Fledge” in Spaceports and Spidersilk

Earlier this year, my story “Forge and Fledge” was included in the January 2016 issue of Spaceports and Spidersilk, a speculative fiction magazine for young adults. It was originally published in the now-defunct but not forgotten Crossed Genres Magazine and focuses on a young teen’s yearning for a better life than a hydrocarbon mining rig floating in the atmosphere of Saturn’s moon, Titan. Support the magazine and all the other talented authors in the issue.

Recently, Titan’s been in the news thanks to Cassini spacecraft’s most recent flyby, confirming that methane fills one of the largest hydrocarbon lakes on the moon’s surface. Cool stuff!

Paperback release of The Change anthology

Last but not least, The Change: Tales of Downfall and Rebirth, featuring my story “Against the Wind,” is now available in paperback! So get yourself to the bookseller of your choice, and snap up a copy today for a great collection of post-apocalyptic adventure stories.

That’s it for me!

It’s been an exciting couple of weeks, including lots of travel for a wedding of a good friend and a weekend getaway with my husband that we’ve been pushing off for months because things have been so busy between the two of us. Normally, this time of year is the cause of much anxiety with the relentless march toward the holiday season, but once I get back from World Fantasy next week, I am relatively unscheduled for the rest of the year, something I am very excited about because it means a return to our relatively mundane lives and of course my writing schedule.

I’m also pleased to announce my story “Digital Ligatures” is now live in Issue 31 of The Future Fire, a magazine of social, political, and speculative cyber-fiction. I’m thrilled that my story is illustrated by Martin Hanford, whose work happens to be the cover image as well. So please check out my story as well as the rest of the issue!

In other news, I’ve received copyedits for my story appearing in an anthology set in S.M. Stirling’s Emberverse. You can see the full TOC and cover copy over at Alternate History Weekly Update. And the publisher has passed along the cover as well, so hopefully that will hold you over until the book is available from Penguin/Roc this coming June.

That’s it for me. Happy writing!

Speculative fiction writer. Persistent AF. The future is now. Her novel Implanted is out now from Angry Robot.